Tour de Khunjrab, to the roof of the world

In search for new events for our calendar we often stumble into special sportives. But the 4-day event we discovered recently is really out of this world: the Tour de Khunjrab. The participants experience the adventure of a lifetime. 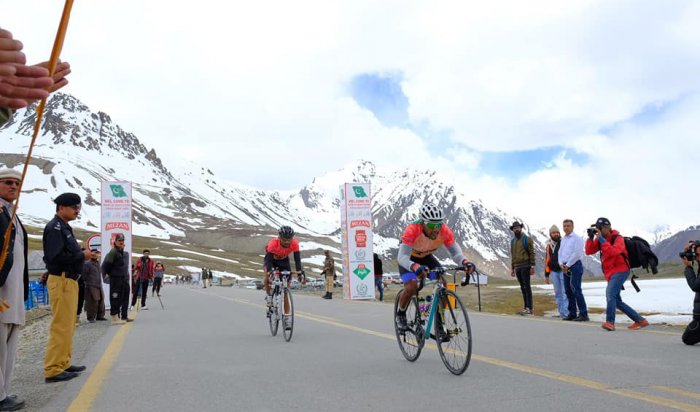 The Tour de Khunjrab a 4 day event. The town of Gilgit in North Pakistan (altitude 1500m) hosts the start. This is the lowest point of the entire tour! To give some context: this height is the same as the top of the famous Col du Télégraphe. Gilgit is located at the foot of the Karakoram mountains, of which the K2 is the most well-known summit. The K2 is the second highest mountain in the world, which gives an idea what you're in for. The dimensions in this area incomparable to the Alpes or the Pyrenees.

The Pakistan Cycling Federation organizes the Tour de Khunjrab, together with the Gilgit-Baltistan government and other organizations. Their goal is to promote tourism in this area. They too have discovered that cyclists are good for business. The level of organization is remarkably high. The routes are car-free, there are 5 ambulances available and there are even motorcycles with spare wheels. The contenders will feel like they're true pro's. If you fancy a 4-star hotel you will however be disappointed: the riders sleep in tents. The entire peloton and followers spend the night on improvised campsites. Which by the way is all managed properly by the staff.

The 2020 route is yet to be published, but in the table below you can see last year's. It's likely this year's route will be similar.

Four stages, a feast for mountain goats. Descents are scarce. It's mostly uphill only for four days in a row. This is not for the faint hearted given the extreme altitudes.

The first stage will let you ease into it. A 2000m finish is something we have in Europe as well. But the time trail on day 2 is already leading to 2900m. And don't make a mistake: ⅔ of the elevation is gathered in the last 6 km. The third stage is the longest and obviously it goes up all day. Then after three hard days of suffering, there's day 4. The distance is only 84 km, but the start is at 2800 meters. That's the same height as the highest paved road of the Alpes. From there on it goes uphill only towards the Khunjrab-pass, right at the border between Pakistan and China. This is the highest border cross of the world. A climb of a staggering 84 km, to an altitude of 4733m. Almost as high as the Mont Blanc. Gasping for oxygen, weird heartbeats and possibly even hallucinations will kick in. Luckily, the contenders of the first two editions reached the finish without issues. But it's an adventure. A higher finish in a cycling event doesn't exist. This is for the true hardcore riders and adventurers alike.

Last year 11 local Pakistani teams entered the race. These were joined by two teams from Sri Lanka and Afghanistan. Each team has 4-6 people, but there are also spots available for individual riders. Amongst others, riders from Spain and Switserland participated. In total, about 100 male riders entered the race.

By the way, the event is not a cyclo or a race, but rather a sportive. However, there's some serious cycling going on. On the front, it's all about the victory. But the majority of the pack is battling against themselves and the elements. The atmosphere is heart warming and even fraternizing. The roads are in remarkably good state, and everyone's riding ordinary road bikes. The quality of the gear varies: from entry level road bikes to Zipp wheels and state-of-the-art Bianchi's Oltre's. It's safe to say mental fitness and flexibility are more important than having light gear.

In the villages along the route it's a national feast that equals the passing of a Tour peloton. The enthusiastic locals wave their flags and cheer for the passing riders. They will need it, because the conditions are tough. Lack of oxygen, drought, heat and cold. And a route that goes uphill most of the time. Tens of kilometers of slight slopes, followed by sections of 20%. A great recipe for an adventure of epic proportions.

Check the video below of the first edition in 2018 (which at the time, still had only 3 stages). 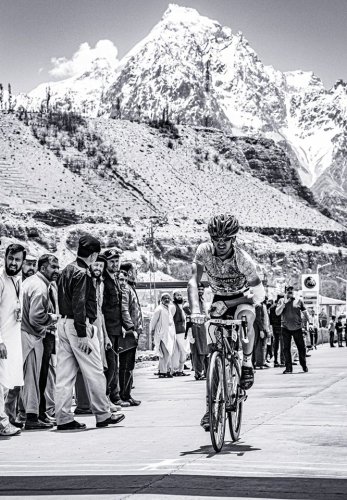 The unbelievable story of Ahmad Farshad

Something which should be mentioned is the unbelievable story of the Afghan rider Ahmad Farshad. Last year he missed a corner in the third stage. The fell over a rail, and broke his elbow. With just a little band aid, he carried on with the last 60 km. He finished the stage in the position you can see on the picture.

But it gets even stranger, because the day after, he rode the next 84 km stage to the Khunjrab pas in exactly the same way. One hand on the handlebars, and the other one in in a pain reducing position. In this way Farshad reached the roof of the world. An incredible achievement.

How can I enter the Tour de Khunjrab?

Also Pakistan is in a lockdown, so this year's edition has been cancelled. It's intended to organize the following TdK next year. If you're interested, you might have a few questions. Most information can be found on the official website, although it's still under construction. In our experience, the organizers are very responsive on Facebook Messenger.

Apart from a team registration, individuals are welcome as well. Each contender needs to complete a fitness test beforehand. It's not clear what it entails this year, but in 2018 participants had to complete the Monal climb within 45 minutes. Tough, but feasible for trained cyclists.

Every person who signs up will guaranteed have the adventure of a lifetime. 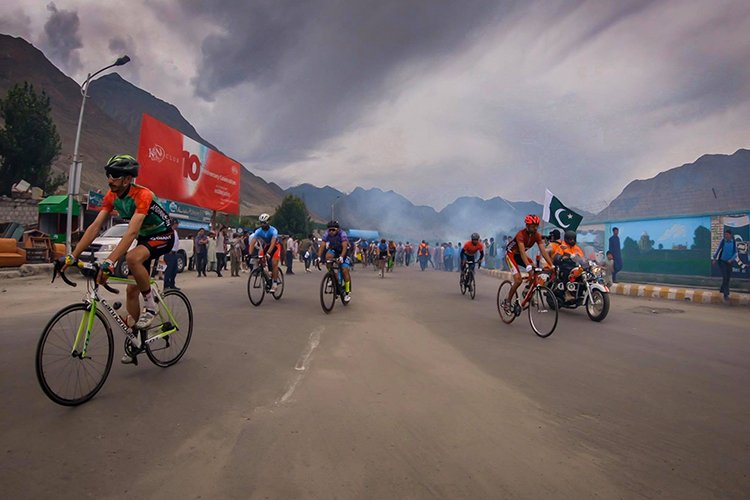 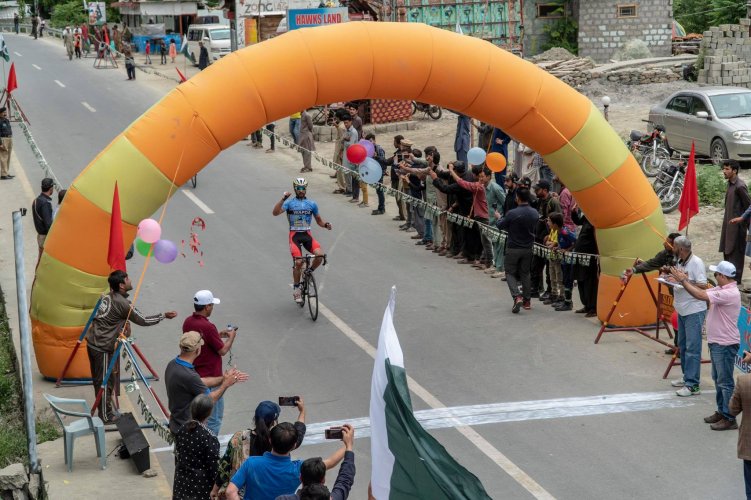 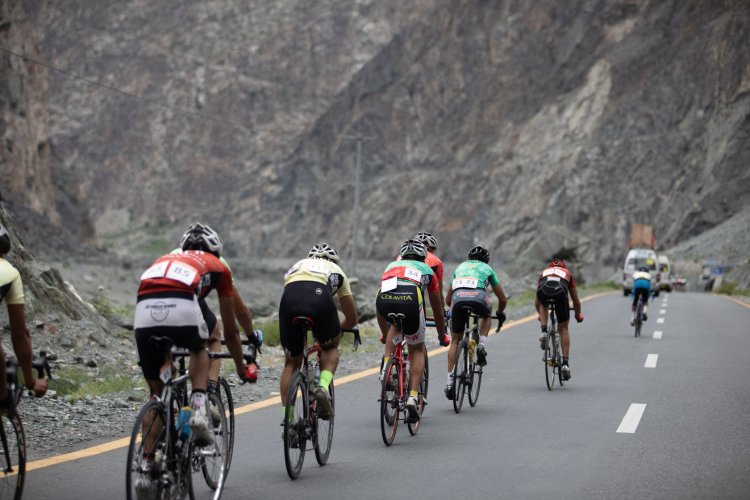 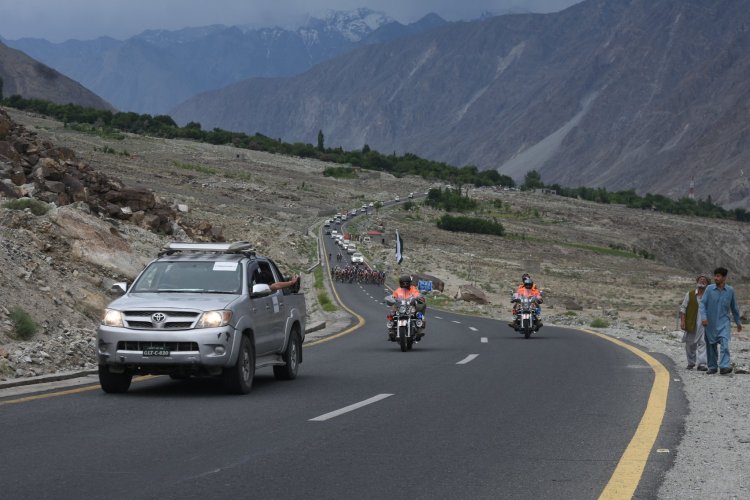 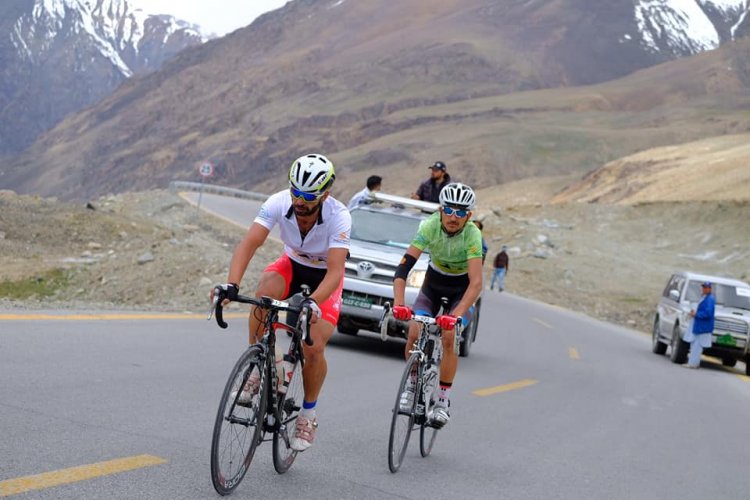 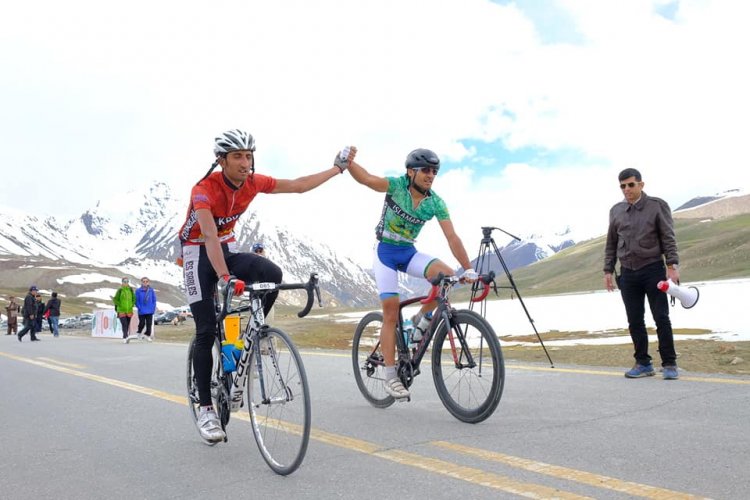 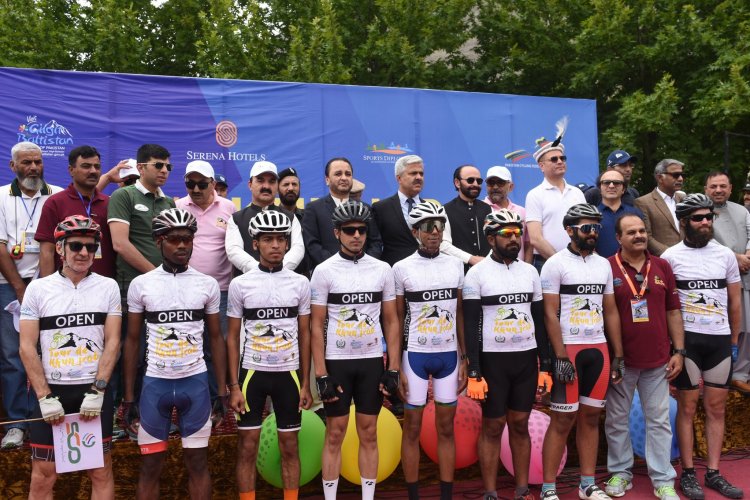