Tropical temperatures in Switzerland caused the Tour des Stations/Marmotte Granfondo Valais to take place under tough conditions. The organization had spared no effort in advance to make it happen. And with success, because it was one of the few major gran fondo events that could be ridden. 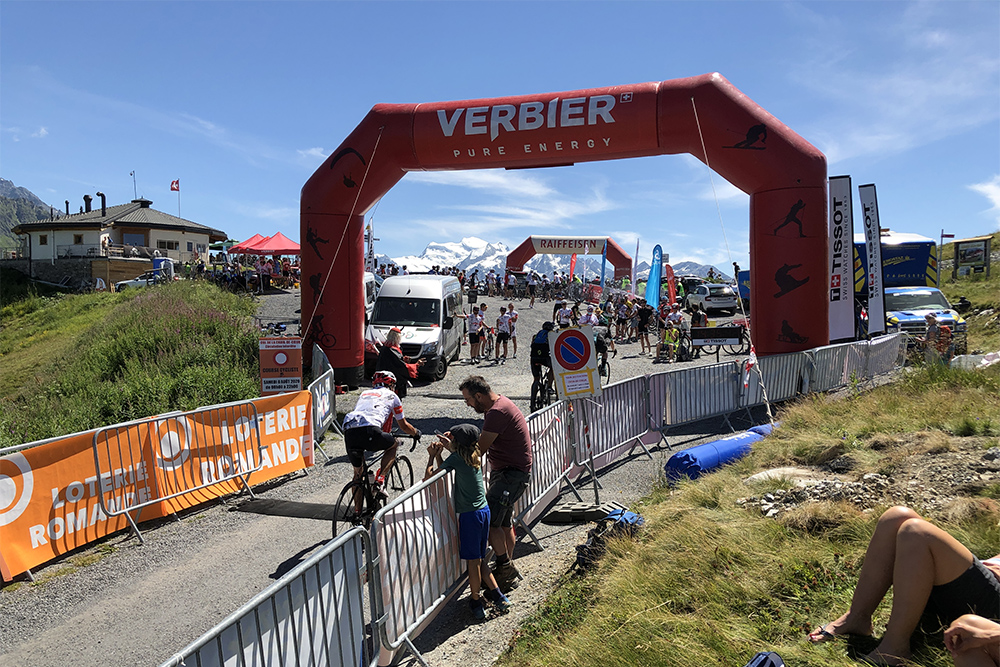 When the Tour des Stations first appeared in our cyclocalendar 3 years ago it ended up on my to-do list. Actually I wanted to ride the ultrafondo of 240 km/8200 hm. But the result of half a year of corona is over 2 kilos extra body weight and 25,000 meters of elevation less than normal. I didn't think that was a good preparation, so I kept it on the Marmotte Granfondo Valais (145 km/4700 hm). That this is still a beast, which is proven by the 25th place in our CWiX 500. The Cyclokalender team consisted of two people: Erik and yours truly. Unfortunately Erik had to cancel at the last minute, which made it a solo adventure.

Beforehand I spoke with Greg Saudan, the boss of the organisation and a fanatic cyclist. For example, he has ridden the Marmotte Granfondo Alpes three times already. "The experiences of the first two editions made it necessary to choose a different set-up. From a logistical point of view, several starting locations were not workable. We had to switch to one start and one finish location. From 2020 all distances will start from Le Châble". When asked how he managed it, Greg answers: "Going very hard, keeping the focus on the corona measures and working well with all parties involved. The corona measures have been approved by the authorities. For example, we removed the Superfondo and the E-fondo from the programme. We start in several small groups, face masks are mandatory at the start and supplies and the expo is completely COVID-proof. We strictly supervise that".

Saturday, August 8th. The start of the granfondo is divided into three groups that leave every 20 minutes. The riders of the ultrafondo will start at 5 o'clock. The mediofondo has separate starting groups. I start at 6 in the first group. All participants are carefully checked for the presence of face masks and lights. According to the weather forecast it will be extremely hot and hence my dress code is 'as little on as possible'. Base layer, arm warmers, windstopper and rain jacket stay behind in my hotel room. At about 15 degrees the morning freshness feels soothing. The masks go off and at 6 o'clock the pack starts the race. 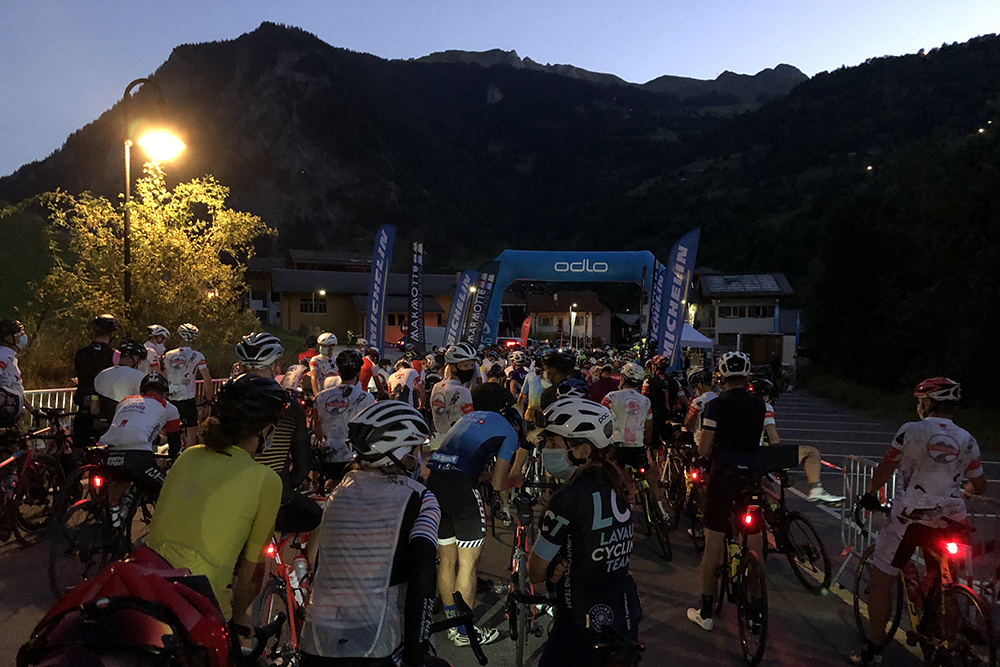 Photo (Herman Nekkers): Lights and masks at the start

The first col is the Col du Lein from Vollèges. A nice gradual climb with a village halfway. After this it gets more difficult and I don't get into the rhythm. I know myself and know that I always have to get myself started. The last kilometer a surprise awaits, because this one is unpaved. Because of the hard surface it is easy to do with a racing bike, but the potholes make it a difficult job. After the col the technical and difficult descent follows. It previews the rest of the day. Lots of hairpins and a road surface with cracks and pieces of repair asphalt. But the organisation is five star level. Literally every dangerous situation is signposted.

In the valley I arrive with a Belgian rider and soon we see two riders in front of us. Working together we catch them. Then we pick up two more and the six of us roam through the long flat section on our way to the second slope: the climb to Mayens de Vermiège. 12.5 kilometers of 8% on average. No easy task, but I'm doing a a lot better than on the first one. It's not hot yet and I come up second in the group. At the supply on the top I make a short stop.

The descent that follows is technical again. I end up in a group and we arrive at the next surprise: the Wall of Hérémence. It's like the Ardennes. I drive straight up between the houses and still think: after the turn it will be over. But none of that, it goes on for another kilometer. And this is only the beginning of a 10 kilometer climb to Thyon 2000. The landscape is open and the sun takes every opportunity to do its demolition work. Continuously 8, 9, 10%. It goes nowhere. I unzip my shirt in the hope that cooling will bring something. It's just a placebo effect.

Upstairs I take my time at the supply. Riding a specific time is already out of my mind, finishing is the only goal. Via the local parking lot, the route continues and this descent is actually the only one of the whole gran fondo where you can let go of the brakes. On this part of the route the ascending and descending riders cross each other. The signallers make sure that there are no dangerous situations. In the meantime they also keep car traffic at a distance. These people understand their trade. 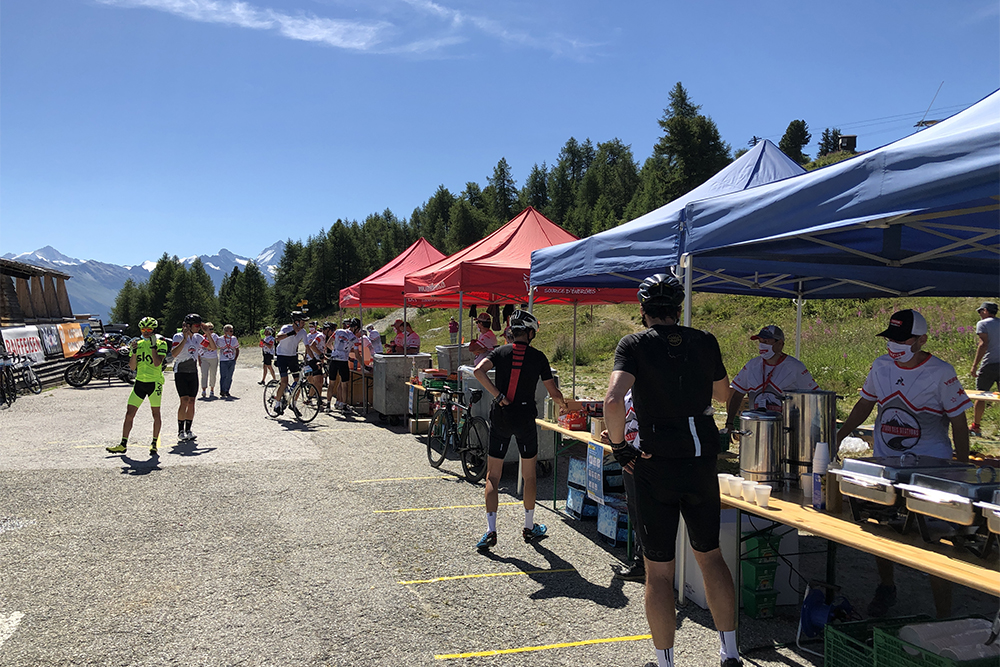 On to the next climb: Nendaz. Again this turns out to be a leg breaker. Long stretches with double digit percentages and peaks up to 15%. Along the road, there's a young rider with cramp. Just to be sure I take a magnesium pill and drink as much water as I can. Meanwhile I overtake several riders. They have thicker legs. The mediofondo has joined the route. The second part of the climb is easy to do, but in spite of that the supply comes as expected. This one is completely COVID-proof, there is even someone with disinfectant. Everything has been thought of.

The remaining climb goes fine and after a small descent follows the apotheosis of the gran fondo: the Col de la Croix de Coeur. Announced beforehand as unpaved. 12.4 kilometers, 7% on average. The first hectometers are indeed unpaved. That is to say, a hard sandy surface with some boulders here and there. Good to do, but this shouldn't last till the top. It's only short and the road turns into rough asphalt with two tracks and gravel in between. And then awaits the next surprise, a terrible wall. For connoisseurs: it seems to be the steepest part of the Redoute. It's hell on earth, there are more hikers than cyclists. That's not going to happen to me, I think to myself. I pull up and drag myself up the hill, encouraged by the many people who apparently know this special place. I manage not to fall over, it's now only about 11 kilometres to the col.

The ski resort La Tzoumaz is the next destination, this is a popular holiday resort for the Dutch and English. A few times I hear: "Come on Herman!" It is flat and it even goes down for a while. I can catch my breath for a while. After that, 8 more horrible kilometres await me. The road surface still consists of rough asphalt with gravel. It's barely ridable. Descending with a racing bike is highly inadvisable. It is steep and hot. The only thing that helps is that most of the climb lies between the trees. Meanwhile, the frontrunner of the ultrafondo passes me as if he is meeting me. A motorbike with a camera follows him. It's broadcasted, beautiful to see. With admiration, I watching him to ride with so much ease. And while I kill time with drinking, throwing water over my head and counting down the kilometres I am overtaken a few more times by men with a posture that is lighter than their bike.

Finally I come out of the forest and I'm at about 2000 meters. I have to climb another 100 meters. Jealous I look at the riders riding above me, they are almost there already. Another kilometre and it's all over. Helicopters are floating in the air. It's wrestling to the last meter, but then I see El Diablo, the Tour Devil. After 8:13 I drive over the finish line, completely broken.

The Tour des Stations/Marmotte Granfondo Valais is a top level gran fondo. The organisation has been taken care of down to the last detail. I haven't been able to see any downside. The people are extraordinarily friendly. The perseverance to keep it going is reason for an extra kudo. And the environment is breathtaking. All in all, a must-do for everyone's honour list.

All results and other info on the official website.

The stay at hotel Le Giétroz is pleasant. It is a perfect accommodation for the gran fondo, as it is located 200 meters from the start. The food is fine, the rooms are clean and the staff is very friendly. The owner told me that they are busy with facilities to accommodate your bike. So they like to see cyclists coming.

The area around Verbier surprises me in a positive way. A more beautiful environment between the highest Alpine peaks is hard to find. This region is perfect for a cycling trip or a family holiday combined with cycling.

Le Châble is situated in the beautiful Val de Bagnes at the foot of the climb to Verbier. This is where Contador set a special record in 2009 by riding up with a VAM of almost 1900. The Col du Grand Saint Bernard is just around the corner and leads you to the Italian border at over 2400 meters. The Lac de Mauvoisin, the Col de la Forclaz and all the climbs of the Tour des Stations are easily within reach. In addition, neighbouring Martigny will host the UCI World Cup this year (if not cancelled).

Verbier itself is also a wonderful place. This is the large, lively ski resort of the area. It has a cozy atmosphere in the summer and has no mega buildings. La Tzoumaz is loved by the Dutch and English and especially popular with families with children.

The day before the gran fondo I visited the Mont Fort at 3300 meters. Here you have a magnificent view over the highest peaks of the Alps. The Grand Combin (4300 m) with its enormous masses of ice towers majestically above the surroundings. But also many other Alpine giants such as Mont Blanc and the Matterhorn are clearly visible.

Hiking, mountain biking, downhill biking and all mountain sports. The possibilities are endless and with the free VIP pass you get dozens of discounts. More information about Verbier and surroundings can be found on the official website. 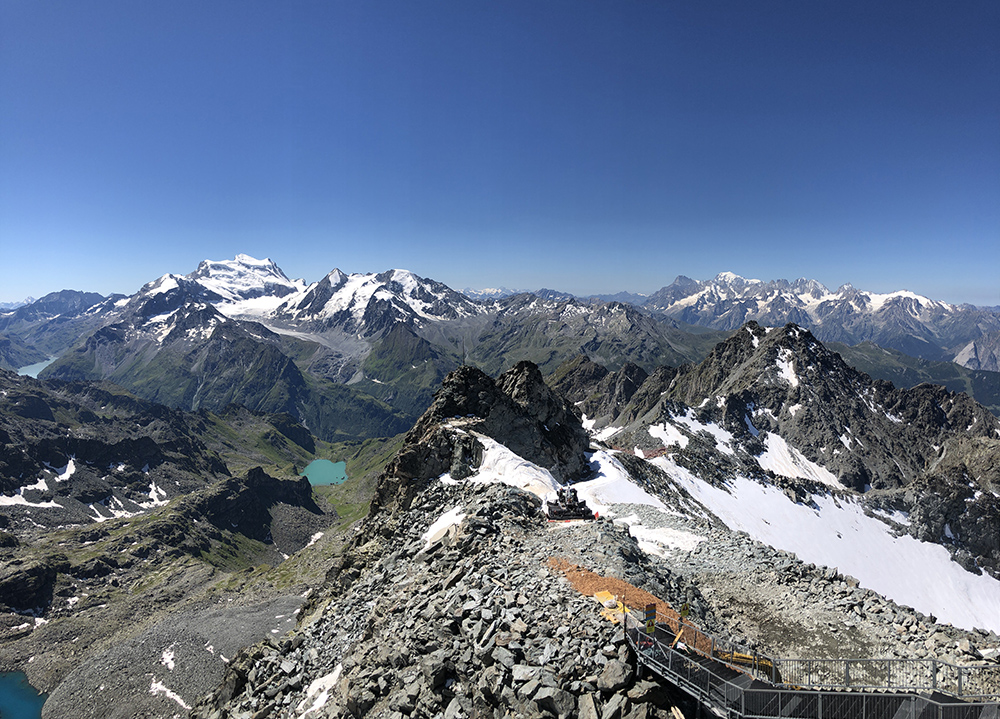 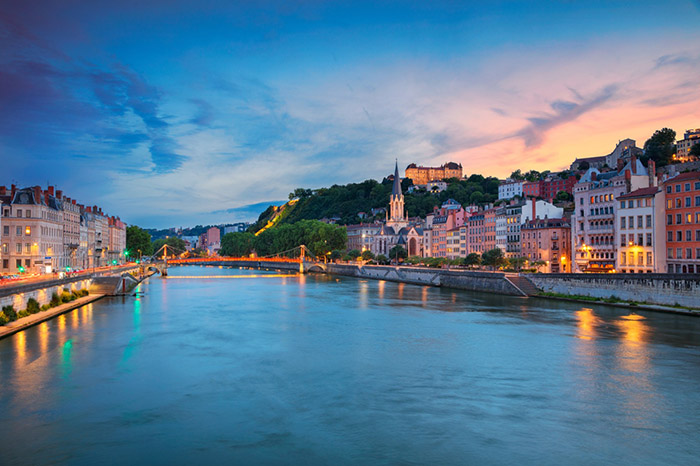 The stage cities and their gran fondo's: Lyon 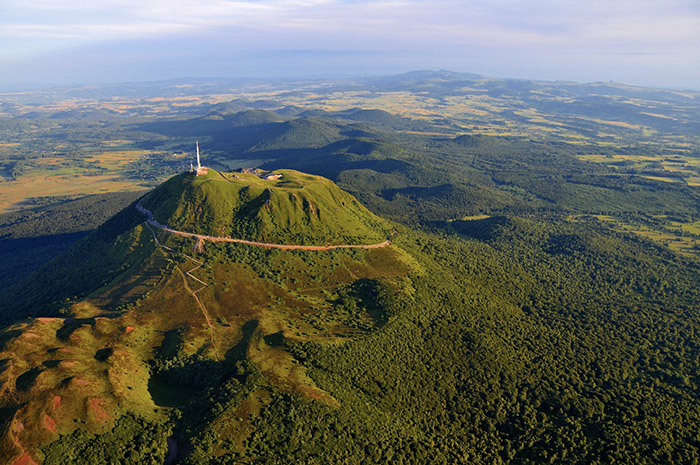 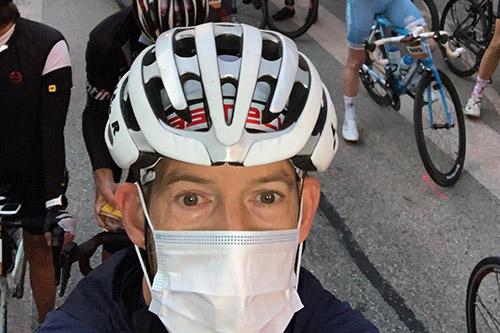