Hotel Bèlvédere, the most famous hotel in the Alps 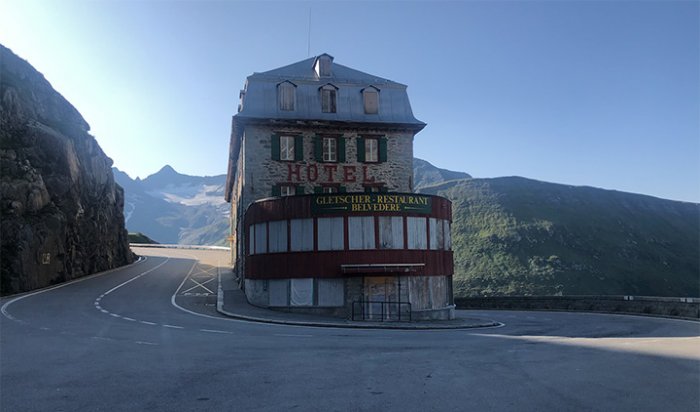 Just a few days ago we wrote an article about the Furkapass, one of the highest climbs in Europe. About 2,5 km from the summit on the west side of the Furkapass, in beautiful Switzerland, one can find the most photographed and most famous hotel of the Alpes: Hotel Belvédère. The hotel was built in 1892 by the famous hotel family Seiler from the posh ski resort of Zermatt, exactly 25 years after the completion of the Furkapass in 1967. The hotel has always been a risky investment: the Furkapass is closed in the winter so the season is really short. The number 1 attraction are the ice caves in the adjacent glacier. Furthermore, the hotel attracts peace seekers, hikers and random passerby.

In 1964, the Furkapass was the scenery of a pursuit scene in the James Bond movie Goldfinger. Some say Sean Connery spent the night in the hotel - rumour has it he became a regular visitor in the next years. Pope John the 23rd was also one the hotel's famous regulars.

In 1988, the Seiler family sold the hotel to the Carlen family, who still owns the hotel to this day. The decade before the sale, the hotel had been empty. In 1990 it was fully renovated, although the interior remained very traditional.  It was as if time had stood still in hotel Bèlvédere.

However, business became harder and harder due to a number of factors. Alternative roads vere built throughout the Alpes, and therefor the traffic and passerby on the Furkapas decreased massively. The glacier has shrunk more than a kilometer (!) due to climate change. Little is left of the once impressing ice caves.

In 2015, a rock formation blocked the road between Göschenen en Andermatt, cutting the main supply route from Luzern. The expensive Swiss Franc was the drop that overflowed the bucket, the tenant had no choice but to return the rental contract and close the hotel.

The Carlen family aims to find a new tenant, but until that day the iconic Hotel Bèlvédere is empty.