A round trip that has it all: Three country tour from Limburg

Cycling in the Dutch province of Limburg is awesome. On this holy ground the Amstel Gold Race takes place. Have you ticked off all the famous Limburg slopes? Can you dream the Camerig and are you looking for a route with unknown pearls? Then the Three country tour will suit you just perfectly. The ride has 125 kilometres and over 2,000 meters of elevation. A perfect training ride.

We start in Valkenburg at the AGR Xperience. Parking Odapark is spacious; there is almost always room. The rate is €1.90 per hour with a maximum of €9.00 per day. Afterwards you can go to the AGR Xperience for a snack, a drink and a shower.

From Valkenburg we're riding towards of Houthem. Here you'll find the Geulhemmerberg, but we turn left in the direction of the Brakkeberg. A nice warming up, because the sign with 14% does not lie. Ouch. After a descent and a flat section, the Bronkweg is the second obstacle; a very nice climb. The start is false flat through the open field, but once in the forest it get tougher at more than 10%.

After the town of Cadier en Keer we arrive at the Rootherweg, which on some maps is called 't Schoor. Anyway, this is a real top climb. Very short through a forest with a maximum of 11.5%. On the right you see the entrance of a marl cave. Having reached the top we drive around the large marl quarry. Via Margraten, Banholt and Mheer it goes up and down towards Noorbeek. No significant slopes, but the elevation is indeed there. Just before Noorbeek we turn left in the direction of Bergenhuizen. One of the most difficult climbs of the day with 15%. This seriously hurts. 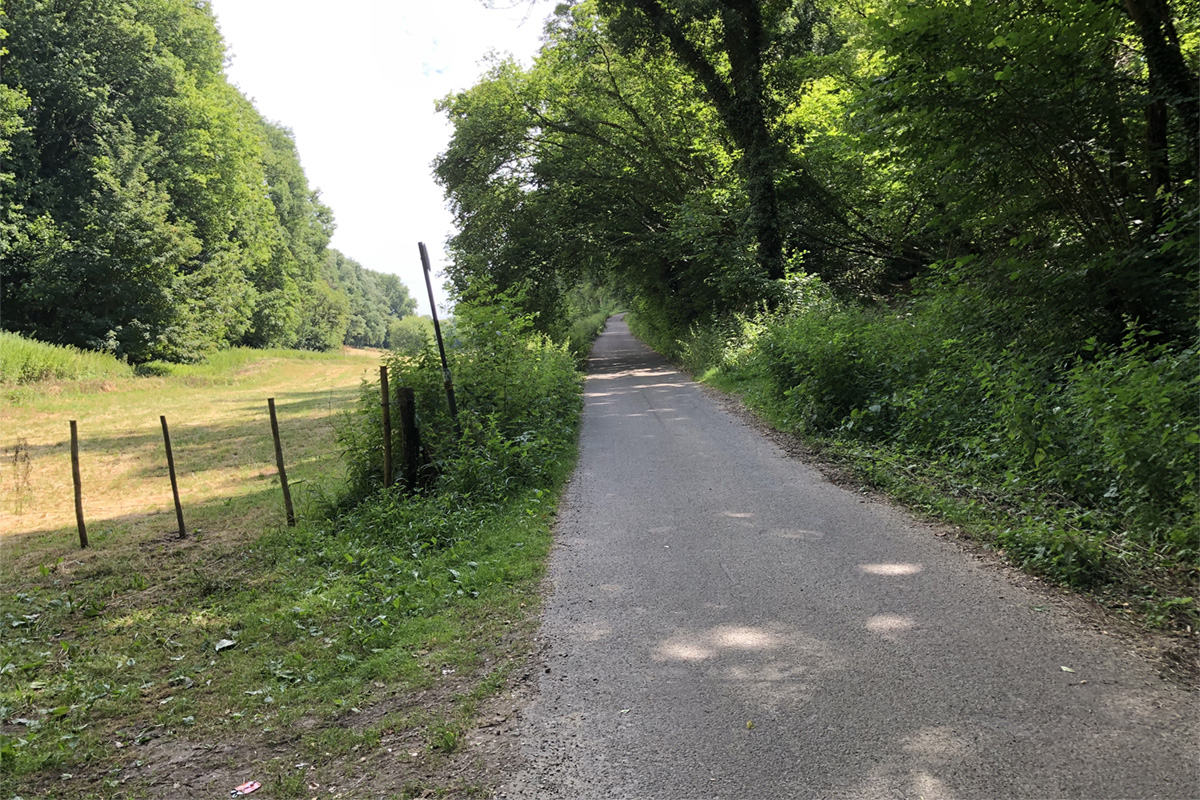 't Schey is the fifth slope. The first 100 meters are tough, but with good legs you take it on the big ring. After that there's another one and a half kilometres of false flat. Look around you, because it's beautiful here. On the top lies the border between the Netherlands and Belgium. We descend in the direction of Slenaken where we don't miss out on the Loorberg of course. If you like, you can take the route inside via the Kersenpad, also known as Rode Kruisweg. A few kilometres further on in Epen it's time for the first stop.

After our stomach and water bottles are refilled we climb the Kuttingerweg to Belgium. The view on the left side of the Camerig is breathtaking. We are now in Belgium. From Chateau Beusdael it goes up again in the direction of the Upper Forest; a not too difficult climb with beautiful views. We descend to Teuven where the Rue Varn awaits us. This is a wonderful climb, almost 2 kilometers straight at around 5%. The Belgian roads are fine. Via a magnificent descent (with some hairpins) we arrive in Sint-Pieters-Voeren where the Magis begins. Without discussion the most beautiful climb of the day. At first it's still false flat, but soon it increases to about 8%. Lovely cycling over fresh asphalt in a beautiful environment. Strange that this climb is unknown.

After a few kilometers on a through road we quickly turn off for the fast descent towards Aubel. We follow the direction of La Clouse. A minuscule road to the left is called the Kosenberg, also known as Mount La Clouse. You'll see the main road above you, that's where you have to go. But the first hundreds of meters are only false flat, that doesn't do much. And then suddenly it hits, it goes straight up. The last 400 meters are on average 12.5% with a maximum of 18%. The Kosenberg fits perfectly in the row Gulperberg, Kruisberg, Eyserbosweg etc.. 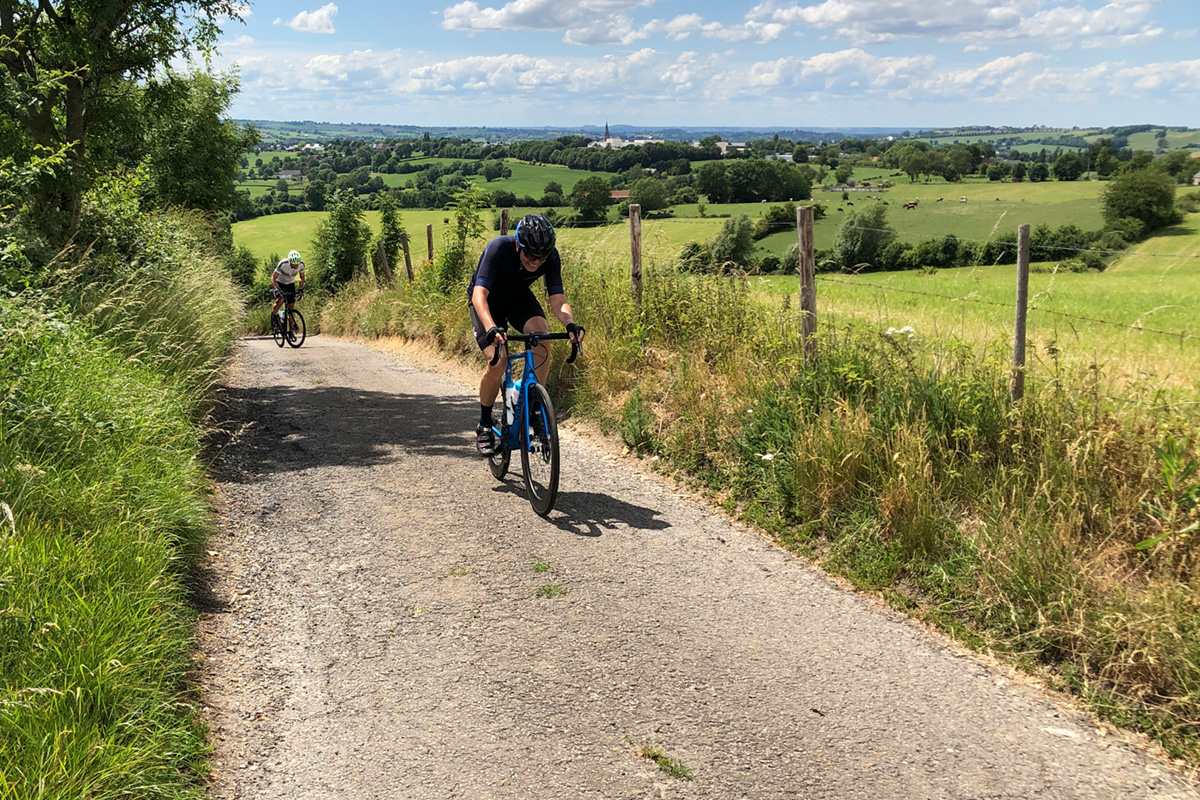 The wonderful, long descent is more than deserved. At the bottom, we go straight up again to the pass of Wolfhaag. Via Gemmenich it's a 5.5 kilometer long climb. Somewhat irregular, but nowhere really steep. Only the last few hundred meters are difficult. The little pass is also the border with the Netherlands. From here we descend to Lemiers. Our feet are grounded here, because a few fences are in the way. We are now in Germany; Orsbach is the next destination. The climb is nice and tough. You'll see the village in front of you, but it gets steeper and steeper. Long stretches above 10% sour your muscles.

Via a few hectometers of extremely bad road surface we enter the Netherlands again. Next destination: Nijswiller. The Schulsberg awaits. This is an absolute beauty in Limburg. Lovely climbing and not really difficult. At the top we reach the crossroads where the Kruisberg also ends and continue in the direction of Eys. Of course you can take the Eyserbosweg, but we choose the milder Eyserweg. Every time I make a mistake in the length of this climb. Fortunately we're having a second stop on the top of the Bernardushoeve.

The coffee, coca cola and pancake has tasted good and we are getting ready for the final showdown. First we descend to Simpelveld where we ride on to the Grachtstraat. Here begins the Oude Huls. A tricky little bugger. Rarely it drops below 10% and at the end there's even a 12% part. The wonderful descent of the Vrakelbergweg brings us to the Fromberg. We won't leave this wonderful runner behind. Always a pleasure to do this one.

Via the famous descent of the AGR we arrive in Schoonbron. Those who have had it all will ride straight away to Valkenburg. But we continue in the direction of Wijlre for the Doodeman. Together with the Keutenberg and Eyserbosweg this is considered the toughest climb of the Netherlands. Again that's confirmed. Phew, what a difficult bitch it is! But then we drive back over the plateau in the direction of Valkenburg. We arrive at the square at the foot of the Cauberg. Everybody is dead, nobody has any morale anymore, but you're lover or not: you don't skip the Cauberg! Time for the last effort over the most famous slope of the Netherlands. At the top the winner is determined and the ride is over. Time for a snack, drink and big stories.

Find the route here on Strava. Or simply download the GPX.

Do you prefer a ride on all the famous Limburg slopes? Then read this article (in Dutch). 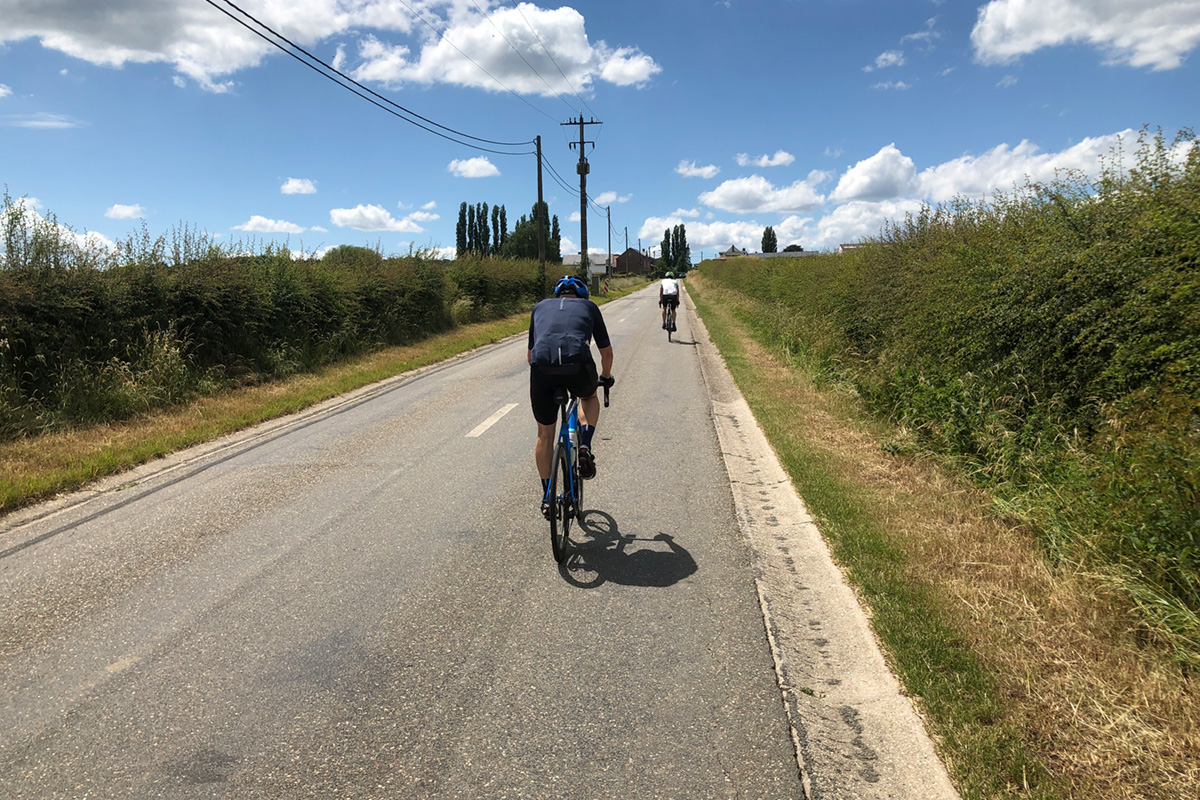 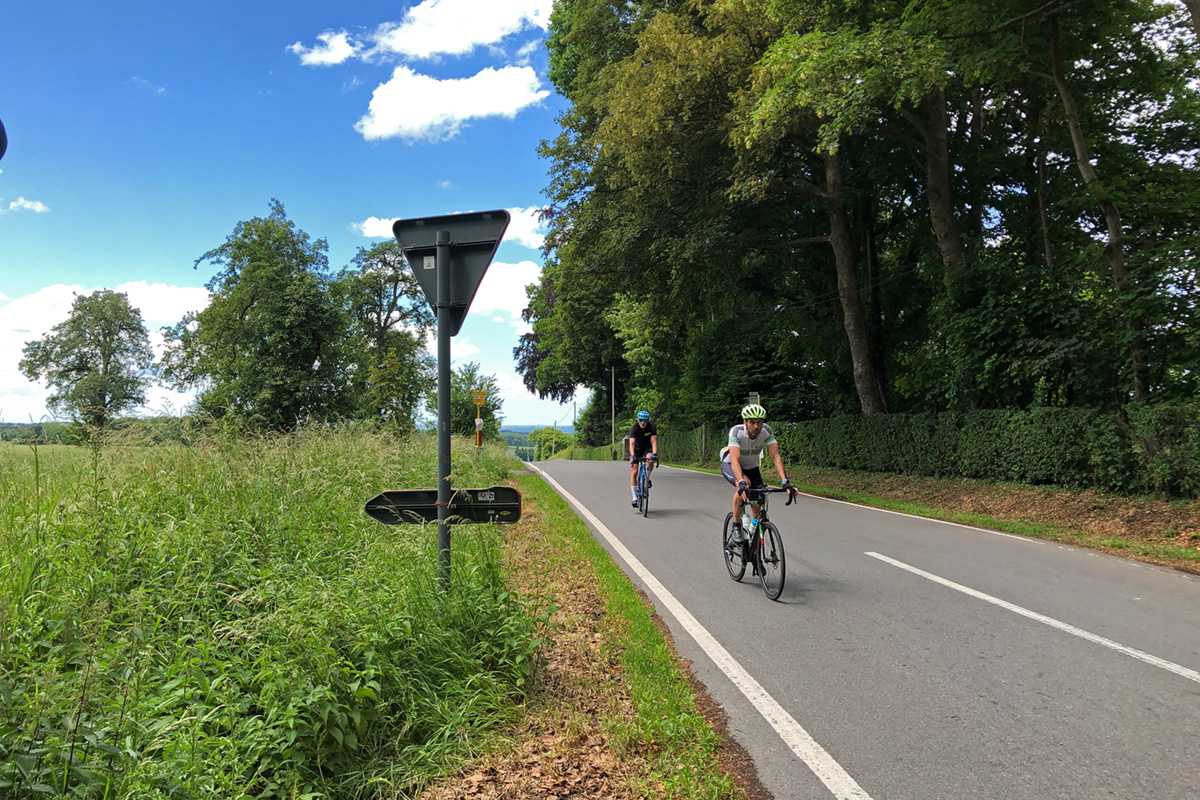 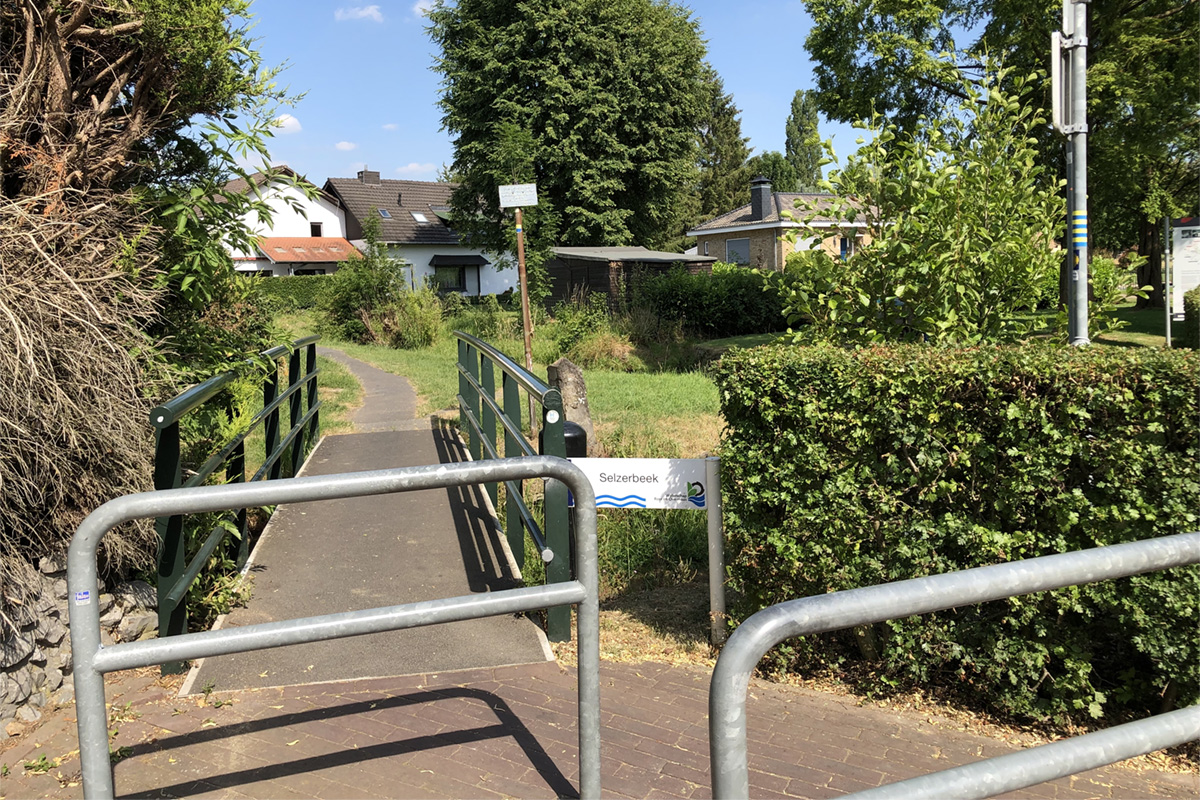 Just the feet on the ground and right back through 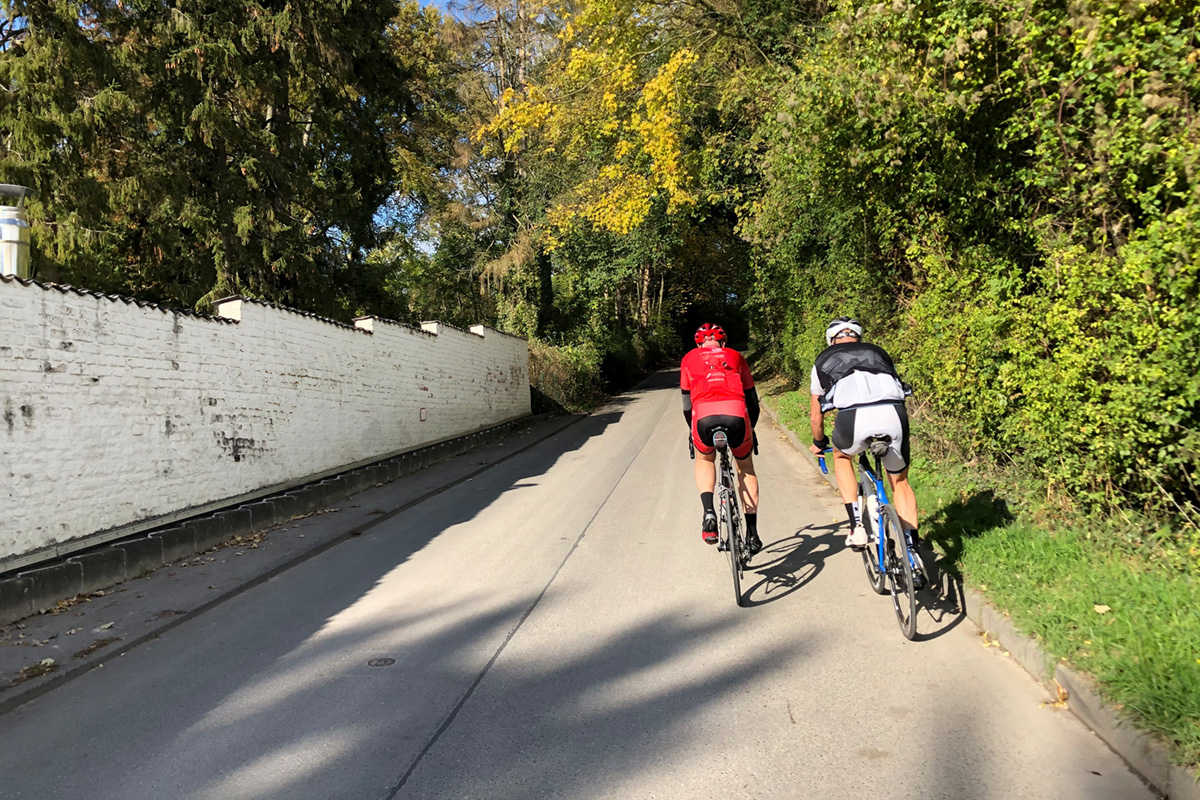 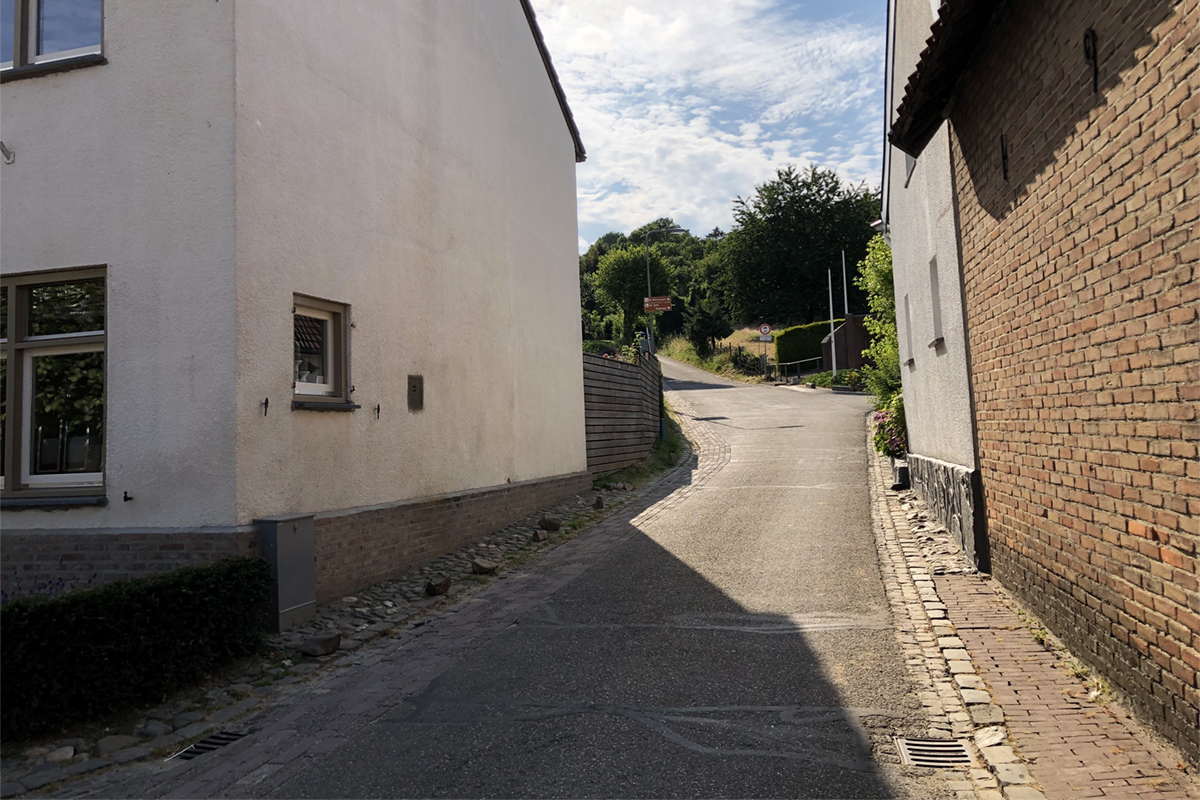