A round trip that has it all: the Posbank

Climbing in the Netherlands means you'll have to travel to South Limburg. But what if you're short of time or just don't feel like going all the way south? Then the Posbank is a very nice alternative.

The Posbank is an absolute secret among cyclists. Centrally located, easy to reach, good asphalt and relatively quiet. You'll find the hill not far from Rheden, on the southern of the national park Veluwe. The name comes from the monumental stone bench on the viewpoint. This bench was built in honour of the 25th anniversary of Mr. Pos, a local hero. The area is officially called 'Herikhuizerveld', but no one really uses it. "The Posbank" has become the common name. 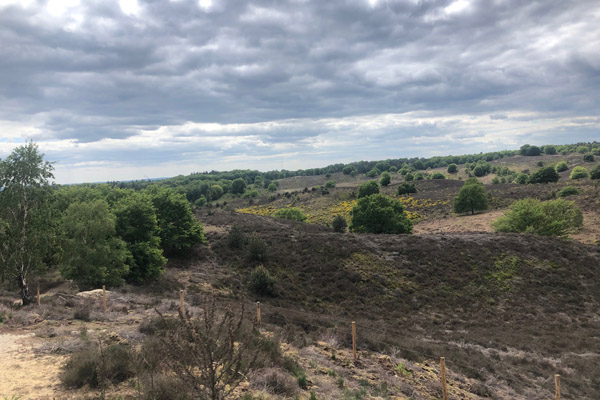 The area around the Posbank is extremely versatile in more ways than one. Forests, heathland, sandy plains and open fields alternate with each other. You can cycle on separate cycle paths, but you can also ride on the larger roads almost everywhere. By the way, bringing your MTB or gravel bike are also a good idea. The hilly area is compact, all climbs lie close to each other. It will be a lot of turning if your goal is to collect als much elevation as possible. On the summit, opposite to the viewpoint, you'll find a visitor centre with a large terrace and an outdoor water tap. The ideal place for a coffee stop.

In 2016, one of the climbs of the Posbank was included in the Giro. This climb (De Schietbergseweg) also counted for the polka dot jersey. It was the Dutchman Maarten Tjallingi who was the first to reach the top. In this way he picked up the first polka dot jersey of that Giro.

The climbs each yield between 40-80m of elevation. A detailed overview can be found here. It's in Dutch, but it's easy to understand.

Our route is made with one goal in mind: to get as much elevation as possible. The starting point is the carpool place at exit Arnhem-Noord (free parking). You'll ride up exactly 10 times in this route, never taking the same road twice in the same direction. All usual suspects are included: the Schietbergseweg, the Zijpenberg, the Lange Juffer, the Holleweg, the Emmapyramide and many others. On the way you will pass the visitor's centre several times. The numbers? A good 85 km with approx. 1100m. Definitely not a walk in the park, but it's not a full day on the bike either. Ideal if you want a lot of 'bang for buck' in a few hours.

Bringing a phone or camera is a must, because along the way you will be treated to beautiful views a number of times.